Owing to technology, the world has rapidly changed into a fast-paced consumer-driven sphere where customers can now expect same day service from courier companies close enough in proximity. Stunning everyone is the promise of drone technology from online-selling giant Amazon.

Online media publication Courier Science reports that drones are already delivering packages in Dongguan, southeast China. Dongguan citizens posted on social media that they had spotted robots with the SF Express logo flying around the city. SF Express then confirmed that it was testing the viability of deliveries via drone technology.

Amazon Planning an Army of Drones

The Inquirer reports that “Amazon calls the drone delivery service Prime Air and foresees half hour delivery time that could be used by people in a real jam who want something quickly and do not mind giving the impression that their neighbourhood is being invaded by small flying yellow boxes.”

Where is Technology Taking Us?

Drone Technology will be an amazing transformation for courier industries worldwide and will take service delivery to the next level. But what about safety concerns? Would drone technology be a viable option for countries with high crime rates and how will it navigate air traffic regulations and safety concerns?

Scott Mayerowitz reports in Associated Press that “Jeff Bezos’ idea to let self-guided drones deliver packages may be too futuristic for Washington to handle.”

He adds that the Amazon CEO is working on a way to use the small aircraft to get parcels to customers in 30 minutes or less. While flight technology makes it feasible, U.S. law and society’s attitude toward drones haven’t caught up with Bezos’ vision.

Amazon.com Inc. says it’s working on the so-called Prime Air unmanned aircraft project but it will take years to advance the technology and for the Federal Aviation Administration to create the necessary rules and regulations.

However, no matter what the challenges, it is still amazing that we now consist of the technology to deliver parcels by drone technology. From one advancement comes another and we can only wonder what the future of courier software and technology development will hold.

While courier companies are struggling to overcome the challenges of rising fuel costs, road congestion and labor costs, innovators are hard at work to develop ways around these challenges. Courier software has already changed the way we see the industry and ordering a package from Israel for delivery in South Africa is more than possible with the ability to track and trace parcels and stay updated with regard to delivery times. Just imagine what kind of technology will follow Drone Courier Sevices…

BBC News reports that Google has taken over seven robotics companies in the past half a year and has begun hiring staff to develop its own product. So now Amazon’s drones have some competition from Google’s Robots.

The New York Times reports that, at this stage, Google does not plan to sell the resulting product to consumers. Instead, the newspaper suggests, Google’s robots could be paired with its self-driving car research to help automate the delivery of goods to people’s doors. 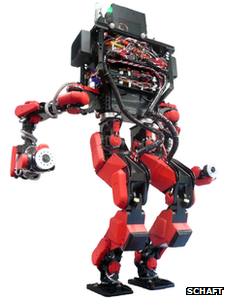 For more information about Drone Technology: